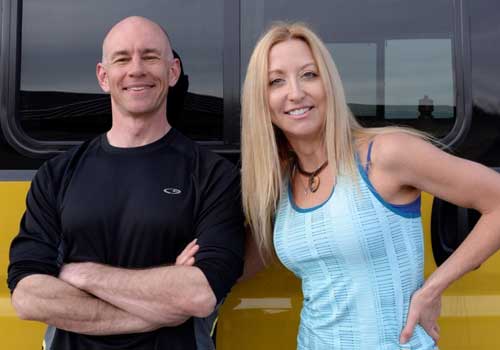 ‘The Fit RV’ test VB Air Suspension in the US… what did they make of it?

Posted by Grant Moyse on

Stef and I have been rolling with VB Air Suspension in our RV for over a month now, and there’s no going back. We’re hooked!

We made a before-and-after video right when we got it installed, and we both thought it improved the ride quality for us. But that was a pretty subjective test. Since I’m me, I had to go a little further with it. I wanted actual data to prove that things really were smoother. The result is this video:

To do this right, I needed three things:

The first one was pretty easy. Right after we left Advanced RV, who had installed the VB Air Suspension on our ProMaster, we headed to Winnebago’s Grand National Rally. While we were parked there in a row of 40 or so nearly identical rigs, I realized I had found my control rig! I searched around the row until I found a similar Travato with stock suspension. Our RV is pretty unique, but the Soloway’s RV was as close as practical. They were nice enough to let us use their rig for our video.

Finding a bumpy road was also pretty easy. Stef and I led bike rides all throughout the rally. I just paid close attention and found a straight section of road with plenty of expansion joints, cracks, potholes, dips, and bumps. It didn’t take long to find our test track, just outside the rally grounds.

Finding a way to quantify ride quality took a little more thinking, but ultimately the answer was in my pocket. Modern smartphones have accelerometers in them. These are what lets the phone know if you tip it, shake it, whatever. So I found an app that tapped into the phone’s accelerometer data, and displayed that in a graph. In practice, it looks like a seismograph. The app I used is called “Vibration”, for the iPhone. The important thing here was that it let me export the data so I could look at it afterward.

Once I had those things in place, you can guess how the experiment worked. We drove each van, loaded with the same passengers (and same driver) over the same bumpy road at the same speed and recorded the data. We also had the Soloways give us their impressions of the ride quality. Since they hadn’t spent the money on an air suspension system, we figured their opinions were bound to be less biased than our own! And when we got back home, I took a long look at the data and produced the analysis you see in the video.

So now that you have the data, ask yourself, which van would you rather be riding in? I did ask myself that question! Not only do I ride in the van, but I have to work on a laptop on the dinette while Swervy McWhiplash (aka Stef) is driving. The end result of all this is that I’m convinced that the VB Air Suspension did indeed smooth out the ride. Stef and I felt it. Ms. Soloway certainly felt it. And now, I’ve got data that shows it.

I’m considering this case closed, and a verdict in favour of the VB Air Suspension.